I describe this a little more elegantly in the paper draft and I won't dabble much further with it here.

The explicit aims (from the draft) include:

Not a language that is without symbol (body language or gestures will suffice) but that which whose meanings are devoid of the Predicate Subject/Object schemata (the denial of which was asserted to be primary in logic by Bradley and is common in certain Buddhist lines of thinking) and which lack the kind of referential assumptions that engender philosophical angst.

The answer to Wittgenstein might be that human language, so conceived, is powerless to reveal. But like Heidegger observed, technology reveals – and herein, the aim of a new technology of and in language.

String Theory is a physical mechanical system that describes subatomic particles as they move through and interact with each other in spacetime.

String Theory addresses several longstanding and important problems in physics. Here, we'll focus on the attempt to replace points as the primary entity of interest when we think about physical space.

I've long expressed my dissatisfaction with points and dots as guiding metaphors in political philosophy, geometry, and mathematics as a whole. Part of this motivation was inspired by the works of String Theorists like Brian Greene.

Here are some interesting parallels:

Later attempts to address shortcomings with the original proposal and advance it to a higher level (in some sense), resulted in a clearer distinction between kinds of connectors (which became formalized):

Note: the syntax diagram above shows several equivalent ways the marks can be written or drawn. The choice of notation is largely irrelevant.

The two relevant, operative, notions are the idea of a syntactic mark (also a fundamental, but relational, ontological unit) called a connector depicted as a curved line (originally called relations) with two ends (called legs or slots) because it reminded me of a side-desk, horseshoe, key-chain, or stand.

Incidently, it turns out that there's in fact a well-known mathematical object called a Pair of Pants - https://en.wikipedia.org/wiki/Pair_of_pants_(mathematics) used to describe certain configurations of Strings: https://arxiv.org/pdf/1310.4319.pdf page 13 - so this seems less an arbitrary choice on my part. 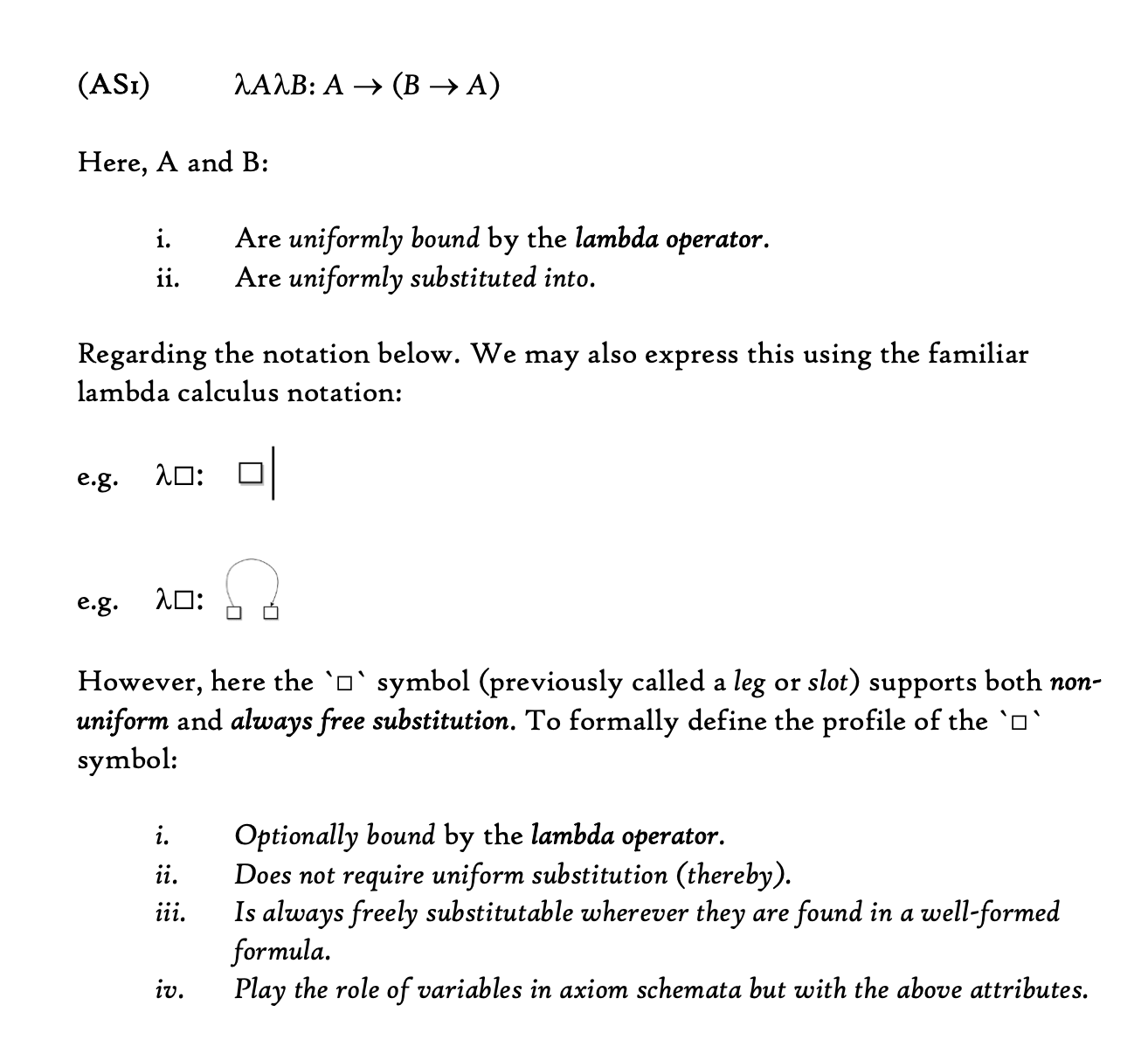 From page 15 of the current draft: I note one some of the formal linguistic differences between lambda calculus variables and the original box operator. Note: I use slightly abbreviated Lambda Calculus notation above (retaining the implication arrow). See page 106: https://www.cis.upenn.edu/~cis511/notes/proofslambda.pdf for more.

It turns out that:

Some further thoughts motivated by considerations from Sign, Identity, Relations.

(From the equivalences established above.)

This comprises a basic algebra (although one with fewer axioms and constraints than a Ring, Group, or Field).

Reconstructing (recovering) theories in Connection Theory is fairly straightforward. A representation thereom is proven to demonstrate a one-to-one correspondance between a subfragment of Connection Theory to some target mathematical theory: 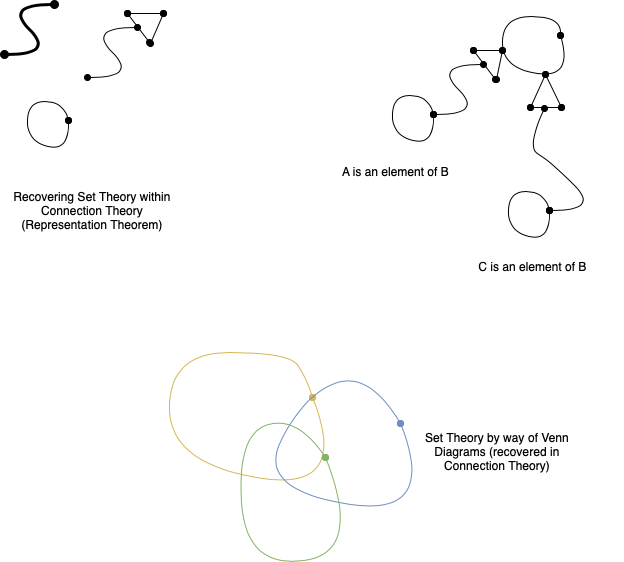 Surprisingly, I was probably more aligned with Tennant early on:

"In some cases, it is claimed, a picture alone is a proof (Brown 1999: ch. 3). But that view is rare. Even the editor of Proofs without Words: Exercises in Visual Thinking, writes “Of course, ‘proofs without words’ are not really proofs” (Nelsen 1993: vi). Expressions of the other extreme are rare but can be found:"

“[the diagram] has no proper place in the proof as such. For the proof is a syntactic object consisting only of sentences arranged in a finite and inspectable array. (Tennant 1986)”

Between the extremes we find the view that, even if no picture alone is a proof, visual representations can have a non-superfluous role in reasoning that constitutes a proof."

I found the following to be particularly of interest:

"What about Tennant’s claim that a proof is “a syntactic object consisting only of sentences” as opposed to diagrams?"

I now clearly disagree - diagrams, that are formally accepted (that is accepted as being formal proofs), are clearly syntactic whether or not they are accepted as free-standing proofs (on their own) is an independent question.

In such circumstances, diagrams are used since they exhibit certain formal properties (e.g. - homomorphic or isomorphic) that can reasonably modeled pictorially (or otherwise).

Note that the scope of Connection Theory is not epistemic (foundational), it is not intended to justify various proof-theoretic methods but to help formalize their use when and where they are presently used (whether alone or in addition to non-diagrammatic means). In that sense, it is "foundational".

Another interesting and non-trivial objective arises as well: representation itself may be easier to discuss and describe.

Currently it’s a somewhat opaque term in philosophy and what we can describe of it is usually cashed out in one or more related kinds of relations:

These however, when they are equally formalized, tend to descend further into like relations:

In such investigations, hands are eventually waved and relations of one kind of another are assumed to be primitives!

I am not a foundationalist (with its metaphor of pyramid). So these concerns do not, to me, invite skeptical worries.

I also think that viewing all things as kinds of language systems (well-defined, combinatorial, processes) aids us to move forward past some of the conceptual murk that beguiled thinkers in the past when thinking about representation (category mistakes, etc., sense data, “objectivity”, “externalism” - note this is not say that these are not meaningful in some sense but that the bulk of work here does not depend on those problematic and likely circular concepts).