Thoughts about depictions of objects and relations. Allowing myself to be guided by some simple pictorial intuitions (that are often employed to do robust math) to see where it takes us.

How do we arrive at the intuition that circles and lines between them should be used to guide mathematical proof?

iv. Your mug is resting on your table.

Objects are standardly depicted as a completely contiguous closed circle: 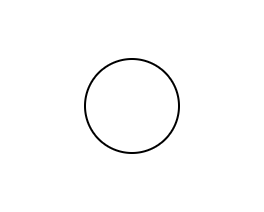 This aligns with our intuitive notions about objects: 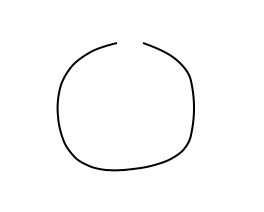 Here, we "cut" the circle producing a "U". Here, the individual object becomes something other than that.

Here, the intuition is that what was once an individual object has been transformed into something lacking a boundary, essence, and identity.

Now, we construct a simple-enough and standard depiction of a relation holding between two objects.

The key insight here is from the step above - that the relation is "really" a "cut" object!

The idea that objects are really a species of relation has been argued elsewhere. What if relations are a kind of object in disguise?

In Physics, the idea that particles (objects) had a dual nature (acting as both waves and particles) was a great discovery. I wonder if current ontology is still constrained by archaic notions that haven't begun to appreciate these kind of "dual nature" approaches to objectual (e.g. - of or pertaining to objects) approaches.