Remarks on Truth-Grounding and the Liar

This post summarizes several further thoughts and comments about a paper I wrote in graduate school.

No other solution incorporates that empirical fact within the theory - they merely dismiss other views as errant, misguided, ignorant, or wrong. Here, such approaches are fully consistent with the view (and as noted below, if they assert that T-Scheme is analytic, they also entail the Truth-Grounding approach - if P is a tautology so is Q implies P for any Q). 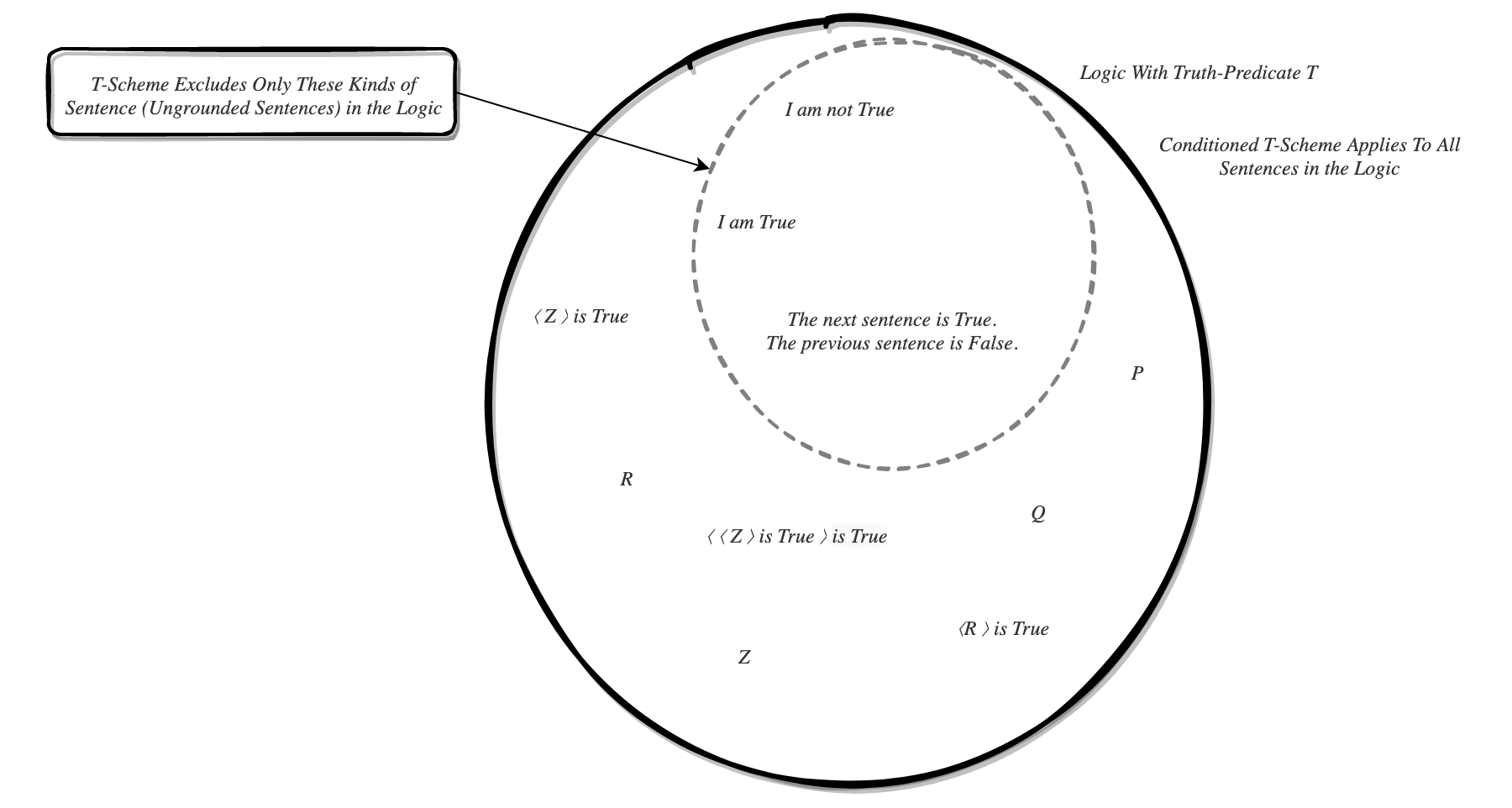 However, I think the following should be added to, supplement, or stand out from the original desiderata:

i. The solution should involve as few additional theoretical assumptions as possible to successfully address the problem.

ii. Additional assumptions about reference, context, language, semantics, and so on are calculated as costs since the truth of the solution is also contingent on the truth of these other theories.

Here, only Truth-Grounding and the Liar meets all of these conditions.

i. Doesn't it provide mathematical and structural support for the empirical observation that people have diverging views about the liar paradox?

ii. Wouldn't a true theory capture that empirical observation? No other theory set does that.

iii. And no small wonder since we're all using classical logic in our metalogic used in these debates.

If (T-Scheme) exists in a language L then so does: (P → T-Scheme). Thus, this solution piggy-backs any other theory. The moment a condition C is added to a language so this, Truth-Grounding theory emerges in it. 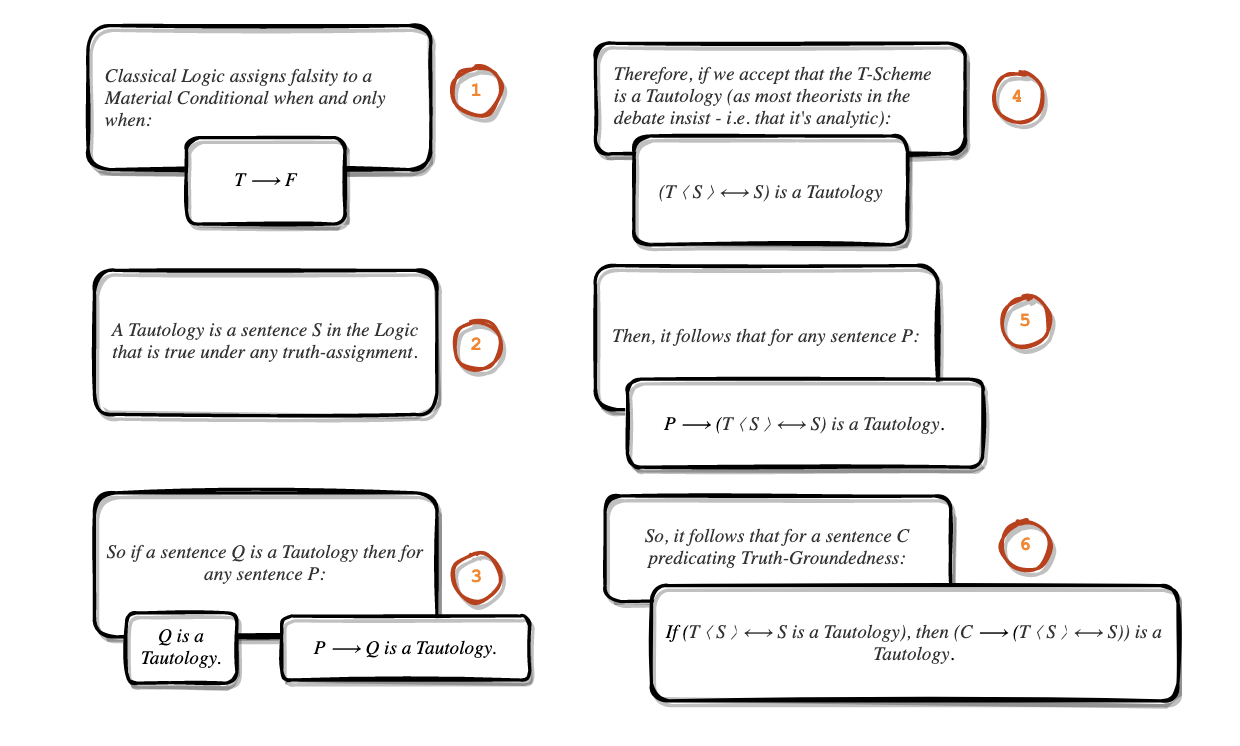 Traditionally, "Universal Laws" or other axiom systems so-proclaimed have gradually seen their tenability recede in the face of greater experimental evidence or advancements in mathematics (Euclidean Geometry v. Hyperbolic Geometry, Set Theory v. Category Theory, Netwon's Laws v. Quantum Theory, etc.). Why should we think our theory of truth should behave otherwise? In other words, previously assumed universal rules end up being mere ceteris parabis conditions (conditions that hold given some specific set of circumstances). And that's exactly what the restrictionist approach is!

Additionally, logic gates are commonly used throughout computer science. Reversible logic gates used the notion of a check (controlled logic gate). These are primitive (fundamental, most basic) notions at the hardware level of computer design. Here, the restrictionist approach aligns with the contemporary computer science and electric engineering! 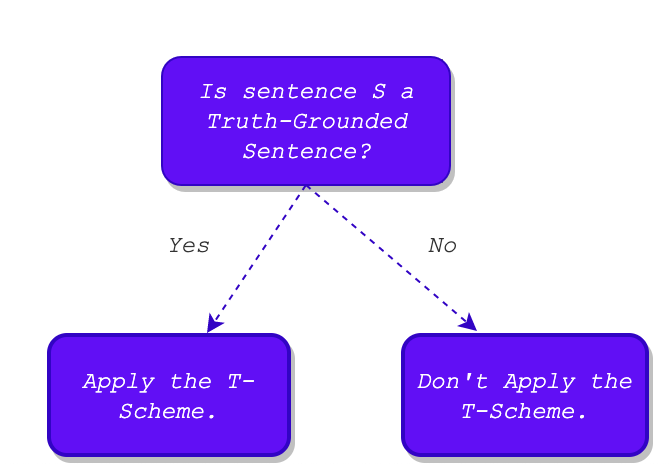 i. A grounded sentence S for a language L is a sentence with a specified property P to serve as the foundation or starting point for a procedure, operation, or use.

ii. Truth-grounding is formally defined as specifying a set of sentences (not necessarily wff) satisfactory for our theory of truth.

iii. A algorithm to define the set of truth-grounded sentences is defined. Call this TGA.

Note: TGA is finite since every sentence in L is finite (though it can be extended to apply to infinite sequences).

What about mathematical diagonalization? To which sentences does this method apply? What are the appropriate constraints (if any)?

Presently, by (totally) unrestricted diagonalization over definitions (letting the name of sentence stand on the right-hand side and allowing names within or as wff along with the somewhat sloppy and often assumed equivalence between df= and ≅), we (obviously) find:

This is problematic. Perhaps the problems lie less with Classical Logic, T-Scheme, or our meta-logical concepts (i.e. - Tarski's metalogic, object logic/metalanguage, object language concepts) but rather with the constraints on assignment and use of name-forming operators and sentences.

That's great since there's little discussion on that in the literature (i.e. - typically, there's a hand-wavy "an adequate name-forming operator" mentioned) and an opportunity to clarify our logical concepts. This may also help to refine the concept of formal definitions in the first place.

i. Thus, we may combine the TGA with improved constraints on the selected name-forming operator to potentially provide a cleaner classical solution.

ii. This is not only of significant mathematical interest but of great philosophical interest as well (naming baptisms, Kripke's On Naming and Necessity, etc.).

Special thanks to Richard Han for some early insights into the concept of mathematical definitions. I've expressed my gratitude for his insights elsewhere but wanted to add those comments here as well!