The Language of God (3DL)

“The Language of God” - What a "God's-eye" view (or "Eagle's-eye" view, if you prefer) would look like. Perhaps something like (but still far inferior from) a way in which we would communicate from such a vantage-point.

These are the building blocks of 3DL:

This should come as no surprise since such visualization tools and their attendant programming languages are meta-languages for a host of language families.

This is the very definition of a meta-language - a top-level language within which more-specific languages can be built (whether combinations of pixels, fragments of a language, new math theories, etc.). It's a mathematical property of these tools that contributes to their wide-spread use and flexibility - particularly for creatives. 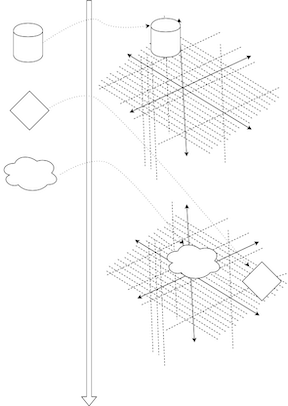 In this language, people communicate by concatenating sequences of Spaces forming Propositions.

Tense is captured by natural orderings (temporal sequences) of each 3-Dimensional Space.

Formally, a quick sketch of the lexicon of 3DL:

The grammar of 3DL: Combinations of Types as Instances in Spaces.

The semantics of 3DL: The truth of a Proposition P is given by its invariance with or isomorphism to other Propositions R, Q, N, ...