The Sensory system (e.g. - the aggregate unity of our visual spatial system, auditory system, olfactory system, etc.) is organized by ontological concepts. I may see a "barn" and think:

I argue that there is no symbol grounding problem - our concepts, language, and linguistic frameworks are implicitly united. There are only relationships between linguistic modalities. The connection between the linguistic items used in cognition and structured sensory representations (or presentations) is discussed further in the paper but is summarized here.

Our sensory systems are partly organized by higher level concepts defined by models and theories.

Models and theories are linked to regimentations of our sensory percepts - thereby linking symbol (in cognition) to persistent patterns produced by our sensory systems.

The Symbol Grounding Problem is how classical symbolic computationalism could associate the items of thought (cognition) or linguistic tokens with something in the world. Essentially, the very problem that Wittgenstein was describing earlier (problems with representation and correspondance). I argue that the connection is not a problem, there is nothing mysterious here and it is given above (by holding the correct metaphor or picture of what's going on between language, world, models, and symbols).

On that basis, I argued in grad school that SCO "solves" (rather, dissolves) the Symbol Grounding Problem by explaining the link between structures (linguistic symbol systems) and data structures allowing us to see that there is no mystery. Only by assuming hard-nosed representationalism do we run into such worries.

The main burden though to get this idea off the ground is to establish a convincing explanation and description of one of the basic concepts articulated in the paper:

"That gives rise to a specific data structure."

I explain this further:

"There is growing consensus that observed phenomena comes pre-structured (what I call a data structure) and that it is from the structure of the phenomena that one constructs their scientific theories and/or models, not from the phenomena directly. The takeaway idea is that we can organize or regiment our phenomenal experience in many different ways and each of these different ways is what I call a 'data structure.' According to the SCO view, there is no 'correct' way to organize or regiment our phenomenal experience but there may be better ways at least insofar as a particular data structure better satisfies pragmatic criteria (theoretical virtues) toward the end of some cognitive project than the rest."

So, I must give an improved articulation of what I mean by this and what is going on. 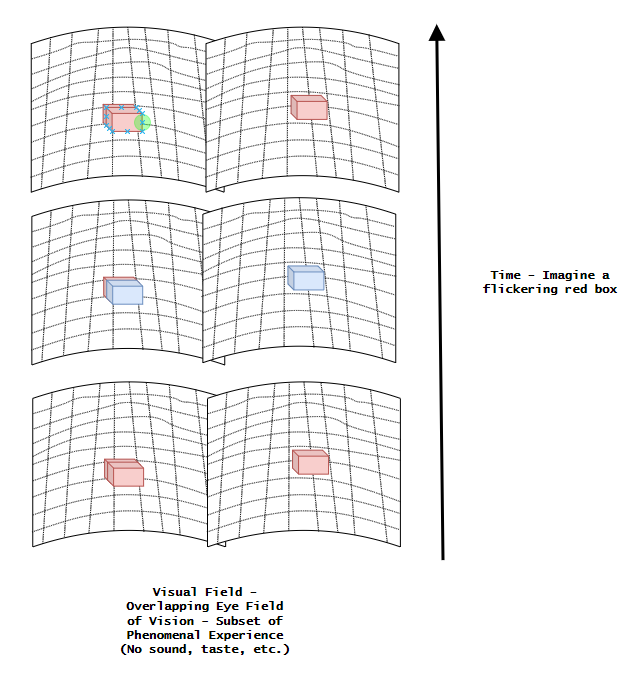 Above, is an improved depiction of what I was describing. It shows the visual experience of seeing a flickering red box.

When we think about the data that's presented to us, we see that it is pre-structured. The box is situated within our field of vision (per Kant and the mind's construction of space and our perception of it) and it is colored. The experience of color is taken to be primitive or basic by many in the qualia debate so I don't feel that this is a particularly controversial claim.

From these structured experiences, we can generate semantic models:

The table above is just such a semantic model (very very simple and crude though it is). Our experiences are pre-structured and from them we may build simple representations of those experiences (models).

AI and ML, for example, demonstrate how data gets clustered and grouped to create stable predictions and classification systems. In other words, what RNN, CNN, and multilayer perceptrons do is demonstrate how neural systems can come to reify or group particular patterns of pixels into "stable concepts" that organize further images fed into the network (classifying them). Here, there is nothing mysterious - only:

Over time, these singular, atomic, discrete units of information can identity say a "dog" or a "cat" with 80+% accuracy. There is nothing mysterious here, there is the phenomenal data here (the pixels) which are pre-structured into RGB units and image files. We use structures to understand and regiment them.

Sellar's and the Myth of the Given

I appeal to no Given but merely what we experience - no sense datum constituting the world of the phenomenal as a kind of ontological or inferential atom (which is, just like Sellar's argued a metaphysical dogma no different than the very a priori metaphysics the empiricists wanted to dispell in the first place):

The world is presented to us and that presentation is structured. The world is not a "pyramid scheme" (it is not governed by the dogma of foundationalism - which when wed with empiricism becomes the subject of Sellar's argument) and inferences (that is rationality itself) arise from and through structures in the manner described above.