I got into thinking about Sophons and Trisolarans after reading the great Wired mag article and NYT review. In that story, an ant-sized species creates a supercomputer by unfolding a proton. Protons are miniscule but when unfolded, the available surface area is equivalent to the Earth's surface. A very powerful supercomputer indeed.

While the conceit's cool (the conceit being that 11-Dimensional String Theory is true), it's probably false. It did however remind me about two topics:

Note: I shall refer to the Banach-Tarski Paradox as BTP henceforth.

A sphere with infinite points on its surface can be cut five ways and reassembled so as to have two identical spheres (identical to the original).

This is partly due to the nature of classical infinite cardinalities (like ℵ₀). In the original scenario explored by BTP, the surface is ℝ (ℵ₁).

Note: Below I shall write |A| to denote the cardinality of some set A.

Proof. Obvious. ℕ is a subset of ℝ.

Therefore, if A is an infinite subset of ℕ and ℕ ⊂ ℝ then A can be duplicated (e.g. - can be found on the surface of the resultant two copies of the original sphere) using the means above.

So, provided that there’s a mapping from infinite but not transfinite set A to |ℕ| and that the appropriate cutting and reassembly procedure is used, A can be duplicated in |ℕ|.

Can this be done? I think so.

In these cases, the finite sets piggyback the infinite ones getting duplicated along the way.

Mapping to a 3-Sphere (extending BTP to 3-sphere).

Does this apply to a 3-Sphere and not just spheres?

We might express this more formally. Take a cube in ℕ³. The total ratio of the cube’s volume and/or surface area is distributed equally across each of the 3 dimensions.

As we unpack (into lower dimensions) we break the symmetry - moving the total surface area or volume into a hyperplane.

Unpacking (in reverse) makes the current N-dimensional object a hyperplane in N+1 dimensions.

In all the scenarios above, objects gain no extra volume or space unless an explicit operation is being performed (e.g. - stretching). 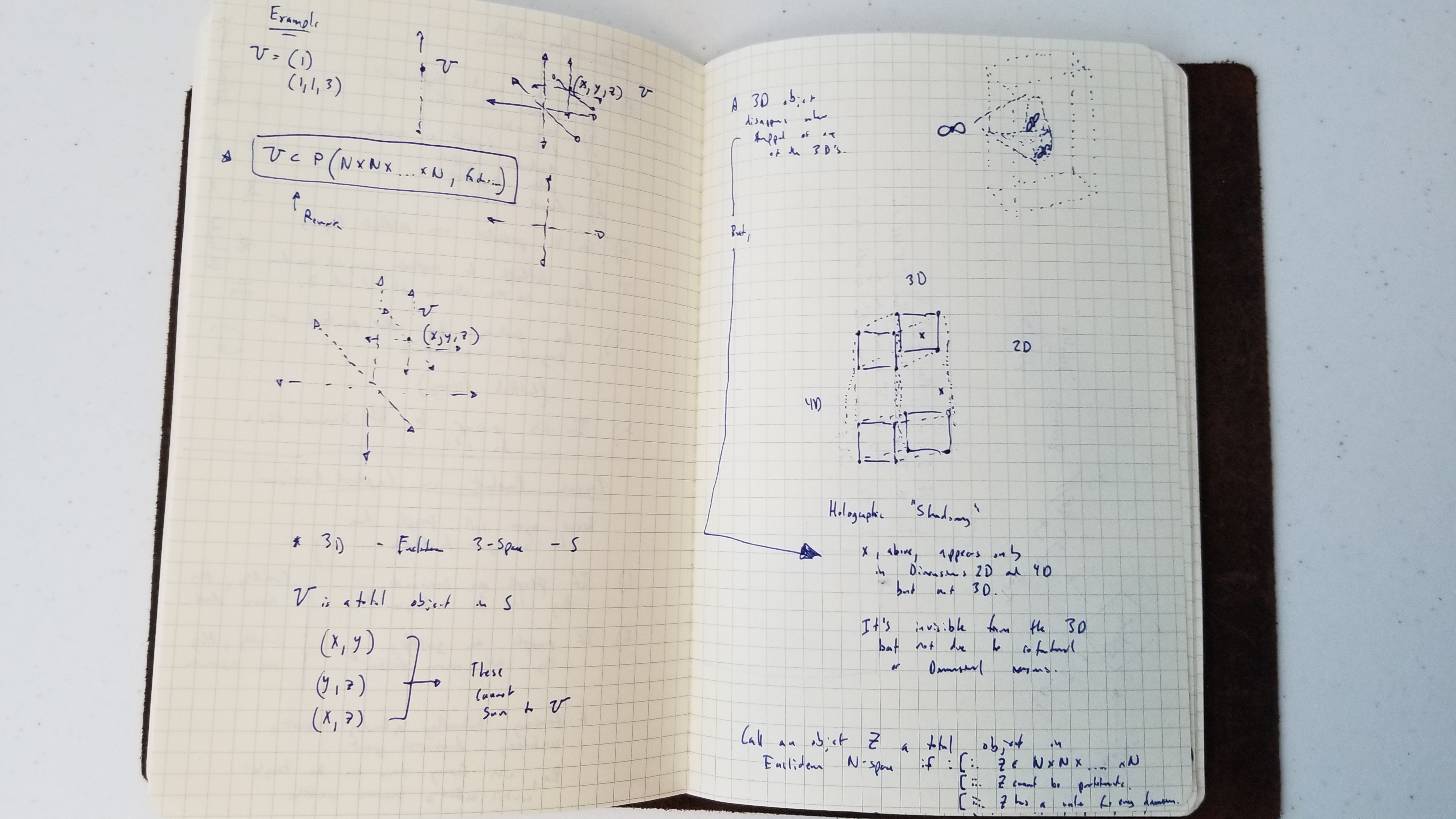 Previously, in 2018, I outlined a brief sketch of an idea I called Holographic Shadowing and briefly alluded to it here.

Let's dive into this more!

I think this is more akin to BTP (in spirit) because the specific operation that's performed allows one to disassemble and reassemble an infinitely pointed area into two or more equal copies.

An object exhibiting Holographic Shadowing can suddenly duplicate it's volume by moving to the appropriate dimension.

Why does this matter?

What if we could copy finite physical objects in the manner above?

i. It’s an alternative kind of manufacturing that wouldn’t require factory-like input-outputs.

Plus, such surfaces might be useful for hyper-computation which allows for ℵ₀ operations in finite time.

With such a system, I could, theoretically, count all the numbers before dinner and duplicate my favorite car an infinite number of times over before desert!