So much about money, its use, and nature remains unexamined, mysterious. For instance, a quick look at some of the most-cited papers on the subject:

Human use of money almost seems to be the unwitting application of inborn, default, natural, or instinctual human behaviors.

But this is very strange given the incredibly important and central role that money plays in our lives!

Below, I describe a few systems I've managed to come up with!

Note: there were probably early predecessor systems that were not strictly numeric (decimals and fractions had not been invented yet) that were monetary in some sense (use of shells for barter). These are probably more accurately described as barter systems characterized by a dominant commodity (gold, seashells, pebbles, etc.) that incidentally were monetary and/or non-numeric.

Anyway, the idea is bewildering at first - we immediately identify money systems with the decimals, floating point numbers precision two or three, the reals, etc. and the idea of a non-numeric monetary system is alien, novel.

Note: to my knowledge there has never been an academic published paper describing number-free, numberless, non-numeric money.

Wouldn't it be a terribly bitter irony if all of these intractable, sometimes violent, divisive political and economic debates over the ages (mercantilism, taxation, capitalism, socialism, etc.) all were the result of unexamined dogmas about the nature of money?

Currency and money here will be treated as mostly interchangeable concepts (though there are some slight nuances in meaning within the economics literature):

I will add the following:

The above three points have not been discussed very much if at all in the literature. To me, that suggests that certain implicit assumptions about the concept of money are doing a lot of the "real work" in those theories.

For example, without assumptions about numbering (and therefore total orderings), money as it's currently legislated loses almost all of its coherence.

One way of doing this involves supplementing the axioms (of a suitable formulation of mereology) with the transactional valuation operator V .

We can, for instance, define the equivalence of the value of transactions in the following way:

Note: Above PP stands for Proper Part and the subscripts individuate them (they can be letters, numbers or whatever).

This would "knock out" the implicitly assumed dogma 7 (from the preceding section Non-Numeric Money):

Note: Non-numeric means that the pricing mechanism is not number-based - see: Fallacy of Overnaming - whether numbers are used to individuate parts (which is properly called mapping a set to an index).

The core idea is that prices and transactions would not be listed using numbers. With the aid of digital technology, automatically inferring what items would be required to correctly and fairly execute an exchange would be possible in theory and in practice.

Most banks and financial institutions keep credits, balances, and obligations through double-entry accounting (but using a single currency component) which can be confusing and complicated. Such systems are highly dependent on time, availability, etc. The concept proposed here breaks the currency itself into two independent pieces and then stipulates how these two parts work together.

Here, a dual account currency is envisioned as being made of two components - two sides of the same coin (both literally and figuratively). Here, money isn't just broken into smaller units (quarters, pennies, etc.) but also into distinct parts that work together to establish the overall value of an account (this being an account-centric approach rather than a unit-centric one).

Suppose person A has the following accounts for this single Dual Account currency:

We can specify several different (and non-exclusive) scenarios defining how these accounts can be used:

I previously outlined a sketch of an idea implementing the popular concept of a community currency. 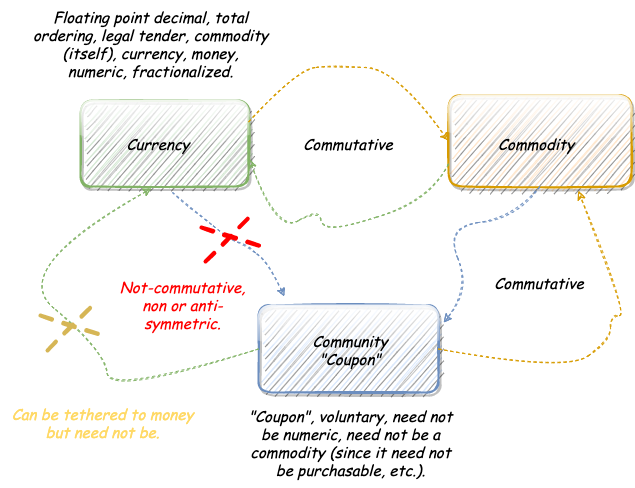 The system above would likely have an inflationary impact since it operates in a manner akin to printing money.

Suppose though it's decided to tether the coupon to something more monetarily-grounded (including money itself). If we supplement the four conditions above with the following, it might lose the inflationary footprint that would likely result from the above:

a. Coupon C can be exchanged once in 30 days for its first transaction.

b. Coupon C can be exchanged once in 90 days for its second transaction.

c. Coupon C can be exchanged once in 210 days for its third transaction.

So, the more times the coupons are exchanged, the greater the "cool-down" period becomes until their next exchange.

If it's true that the primary negative effects of inflation stem from more money being spent (thereby increasing demand, reducing supply, etc. and increasing prices), then a cool-down mechanic may help to mitigate run-away prices whilst simultaneously allowing for many basic needs, services, and other critical parts of government and public infrastructure to be paid for non-monetarily.

Are there other ways to support such a system? I think so.

In this scenario, people are rewarded for accepting the coupon since the government creates a control commodity to back the value of the coupon.

The control commodity can be pegged to some equity with intrinsic value (so that the value of the control commodity increases over time) encouraging saving after the first transaction (which might increase monetary value without some of the inflationary effects above).

A table depicting the differences between several similar concepts: